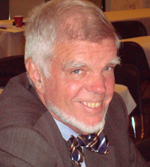 The Consortium remembers the life and work of noted disability rights lawyer Thomas K. Gilhool, born in Ardmore, Pennsylvania, and who passed away August 22, 2020, in Boston.

Mr. Gilhool’s career focused on the rights of the disenfranchised, including the disabled community and communities of color.  As lead council in both Pennsylvania Association for Retarded Children v. Commonwealth of Pennsylvania (1971) and Halderman v. Pennhurst State School and Hospital (1974), his work advanced the effort to de-institutionalize and integrate students with intellectual disabilities, under the same “separate is not equal” premise that began the racial integration of public schools in the 1960s.

His advocacy remains a lasting legacy for countless children and adults with disabilities across Pennsylvania and the nation. In 2013, the “From Wrongs to Rights” event sponsored by United Way of Southwestern Pennsylvania and the Heinz History Center honored Mr. Gilhool and other advocates whose fight for change established the right of people with disabilities to live in the community and receive appropriate services. You can read a full obituary in the Philadelphia Inquirer here.

The Consortium collaborates on disability history efforts with individuals and organizations throughout Western Pennsylvania.